It was Sarah that started the ball rolling. Sarah and Pilar. They got chatting in April 2018 and the conversation wound around to Sarah telling Pilar the premise of my play, Carried by the Current. It makes sense really because Pilar is not only a CPA and a musician, she’s also a great supporter of various women’s groups, so I can imagine that Sarah thought she’d love hearing about this play. And Pilar did. Her enthusiasm immediately bubbled, the way it does when she gets excited about an idea, and she said, “Let’s find a way to bring it down to Seattle.” As if Sarah had taken one of Cupid’s arrows, dipped it in my play and aimed it cleanly at Pilar’s theatrical sweet spot.

But Sarah has been with this play since it was first produced at Skagit Valley College in 2010. In fact she created the role of Bess, inspiring me to develop the character with more voice and importance because of the way she played her. So Sarah understands the play because she has lived it. 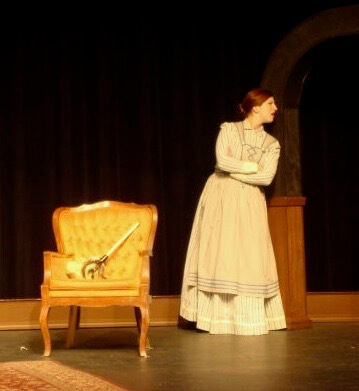 And not just during the production. She, along with all the other cast members, has volunteered again and again to take this play to various locations for staged readings during women’s history month and domestic violence awareness month, a fact that Sarah’s husband, Dustin, pointed out when we all finally got together in Seattle to talk about a production. “The play’s already got a following,” he stated with a big, disarming smile on his face. “We just need to grow it.”

Getting ready to read the play on Orcas Island

He was right, of course. I know the play has a following from all the letters and e-mails and conversations I’ve had with people who came to the production or a reading and wanted to know where the script had gone from there. In fact right around the time of Sarah’s conversation with Pilar I received an e-mail from Luann on Orcas Island, who had attended a reading and gone on to take a position at Orcas SAFE as a result of the play. “Your play sparked an interest for me,” she wrote and then went on to say she wanted to do a full production of Carried by the Current with actors on Orcas Island. So I can see that the story of these ladies from Texas and what they managed to achieve in a time when women had no legal or societal voice stays with people, overwintering in a following that’s been waiting for the right conditions to sprout so it can grow some more. My problem had always been that I didn’t know what those right conditions were. Maybe, I thought, Sarah, Pilar and Dustin, along with Tristan and Cindy, did.

I felt myself emotionally stepping back, to contain my excitement so I wouldn’t be disappointed if this production didn’t come together, and as I stepped back, so the momentum towards the production increased. The first meeting led to a second in which Women’s Work Productions was formed with the mission of bringing women’s history to the stage, starting with Carried by the Current. The second meeting led to the first “test” preview of the play––three selected scenes read by actors with me talking about the story the play is based on and why it spoke to me––at the new Back Room Lit Lab at the Conway Muse on January 3, 2019. I thought this first preview would just be our chance to practice so I was astounded when a radio interview I gave about the play and the Lit Lab on KSVU led to so many people reaching out to say they were coming. People that had already seen the production at SVC or one of the staged readings. “Anything to do with Carried by the Current interests me,” Mary Ann wrote. Even containing my excitement I could see that ball was rolling.

At this point I maintained my stepped back position but allowed myself to believe that this was really happening, enough that when people in my local community asked me what was next now that I’d released The Gift, my latest novel, I told them about WWP and a Seattle production of Carried by the Current. Offers to help started drifting my way. We scheduled a second preview in the Upper Skagit, where I live, at the Historic Concrete Theatre. The day before the preview, snow fell on the two feet we had already and a winter storm warning went into effect for the whole of western Washington. Val, the owner of the Concrete Theatre, reached out to me. “What should we do?” she asked. “I have people calling saying they’re still planning to come if we’re going ahead with it.”

“Then let’s plan to go ahead,” I replied.

A dozen people braved conditions to come to that preview––one fellow came even though he’d come to the first preview at the Muse. “I love this play,” he told me––and for the first time I put out a gallon jar for donations. We spent forty-five minutes in each other’s company, performing the scenes, talking about the play and the production and these ladies from Texas, and when the audience had gone home I turned around to see that the jar was full of money. Then the checks started arriving in the mail.

Now we found ourselves running to catch up with the speed of that rolling ball. Dustin and Pilar and I tumbled over each other to get a website started, an EIN, a bank account and while we were picking ourselves up and having to repeat steps because we didn’t actually have what we needed the first time we tried to take them, the “meant to be” magic began. I deposited the funds we had raised already in our brand new bank account and the receipt the ATM popped out said we had over $20,000. We didn’t but I grinned anyway at the computer’s misreading of one of the checks, thinking now that’s a positive start. Pilar, while we were in a conference call, texted Will Edwards, the founder of Innovation Foundation, a friend and client of hers, to see if WWP could slide under the umbrella of his non-profit arts foundation pending getting our own 501(c)3. He got back to her with an immediate thumbs up, alleviating our worries on that score. And I went to see the musical Come From Away in Portland because someone had told me that show had been produced through the same kind of grassroots fundraising that WWP was planning to do for Carried by the Current. While I was waiting for the curtain to go up, the woman in the seat next to me—Julia was her name, like my sister—asked why I had come to see this particular show. So I told her: about being a playwright and about the whole fundraising mission and how it was supposedly similar to the way this musical started. “What about you?” I asked. “Why did you come to see it?”

Julia leaned forward in her seat to get closer to me, as if she were sharing something very special. “Well,” she said, “I have a friend who goes to see plays on behalf of an organization in LA that gives money to playwrights so they can get their work produced. This was one of the shows she came to see and she recommended I see it too.” Julia smiled at me, obviously recognizing the significance of what she’d just told me, and asked, “Now what’s the name of your play?”

What I’ve come to understand in this first part of the play’s journey to the Seattle stage is that the best thing I did was step back. Because in stepping back I let go of the play so it could belong to others. And isn’t that what any plays needs? To belong to the actors breathing life into the characters, to the producers, director, designers and technical crew setting it on the stage and to the audience members allowing themselves to live the story as they watch it being performed. And in the case of Carried by the Current the play also belongs to the women from Texas, who lived a reality that was so far ahead of its time it makes us take off our hats in admiration. It may not take a village to put on a play but it does take a team. And I am proud and pleased and, yes, excited to see the team that has already formed around Carried by the Current to take it to the stage in Seattle.

By reading this blog post you are now part of that team too, and we invite you to sign up to follow the blog so you can read future installments of the journey to production of Carried by the Current. March is Women’s History Month and the start of spring, so in honor of both, let me step back further and take my play’s following out of the shade so it may grow, and the sun shine down on a fabulous piece of American history. 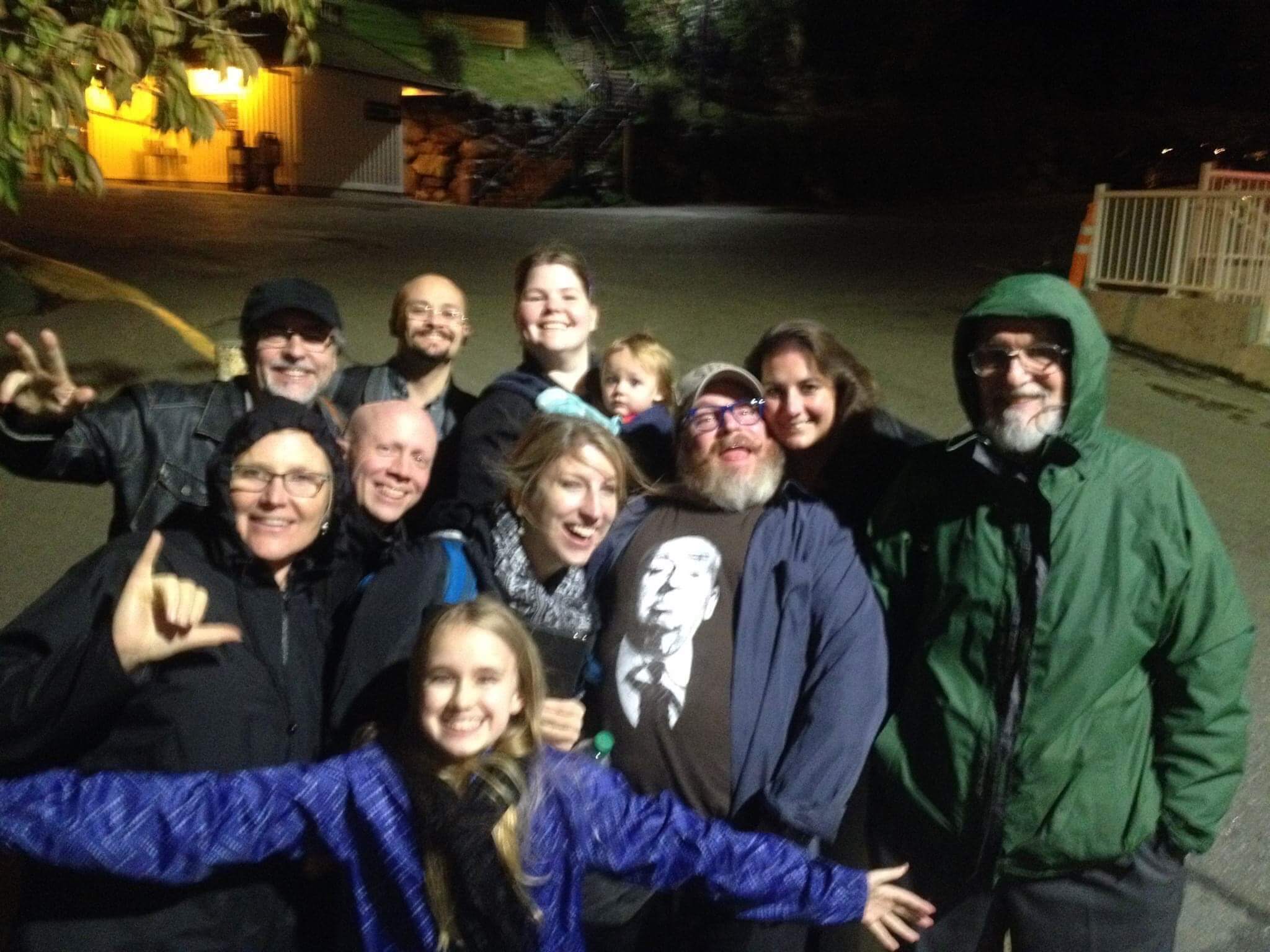 A cast of happy actors at the Orcas Island ferry terminal.