Step Two: Behind The Scenes

As you may have figured out from our last blog post, we’re all actors here at Women’s Work Productions, which means our favorite thing to do is be on stage communing with the audience. But sometimes in order to get to that place, there’s a lot of backstage work that has to be done. So over the last couple of months that’s where we’ve been: backstage. Specifically working on our website.

Yes, none of us wants to admit that we can be upstaged by the Internet but in 2019 that is the first port of call for most people wanting to learn about us. Dustin, our tech guru, staked out our claim to a place on the World Wide Web back in January but since the beginning of April we’ve been setting up our tent on the site, one that is safe from predators yet roomy and attractive enough for visitors to want to linger awhile. We’ve been assisted in this by another tech guru and new volunteer JP. Thanks and welcome, JP.

Sarah is also very tech savvy and she established us on social media with pages on Facebook and Instagram. We don’t have many posts yet in either location because the backstage work isn’t what we share even though it is essential to the success of a show.

I must admit, It’s been pretty fascinating for me as writer without much tech knowledge to hear language at WWP meetings that goes right over my head. It makes me think about the audience in Shakespeare’s time that went to his plays specifically to hear new language. I wonder if the fact that actors were performing the words as well as saying them helped with the comprehension, otherwise how would they have a clue what words like “bedazzled” and “manager” meant. (Yes, apparently the Bard introduced us to the notion of a manager in A Midsummer Night’s Dream.) Then I find myself daydreaming about a play where a writer is learning computer-speak from actors performing the words and wonder how they would act a term like “parallax animation.” (That’s what happens when you click on our Who We Are page and our bios swoosh onto the page. They actually slide from left to right, JP tells me, which is why I am very, very grateful for our tech gurus. They know how this all happens as well as the correct terminology for it.)

All this website precision takes time, however, and reminds me of other “tech” work we do in the theatre. Specifically tech week, also known as “hell week” in the biz because it’s when the technical aspects of the production––lights and sound––are set according to director’s wishes, and then cued to synchronize with the acting on stage. This involves a lot of painstaking repetition for the actors of entering and exiting and standing in certain spots on stage . . . and not much acting, even though the show is about to open. But we do it because we don’t want to find ourselves on stage giving the line, “Is that the doorbell?” only to have the doorbell ring two replies later. In the same way we held off on a certain amount of outreach in the last couple of months for WWP because we wanted our website to look and function in a way that would put the spotlight on us rather than have it go down when you’re in the middle of reading about us.

And while we were working backstage our actors also had other roles to play. Dustin and Sarah both got lead roles in the “new parents” show, which opened on April 17th with the birth of their beautiful baby daughter, Adira.

Pilar also got a new role as hospitality director for Wheelhouse Digital Marketing, where one of the first things she did was set up a preview of Carried by the Current. We performed in a long, spacious thruway between the windows overlooking Salmon Bay and the conference room at Wheelhouse, which lit our thirty-minute preview perfectly. 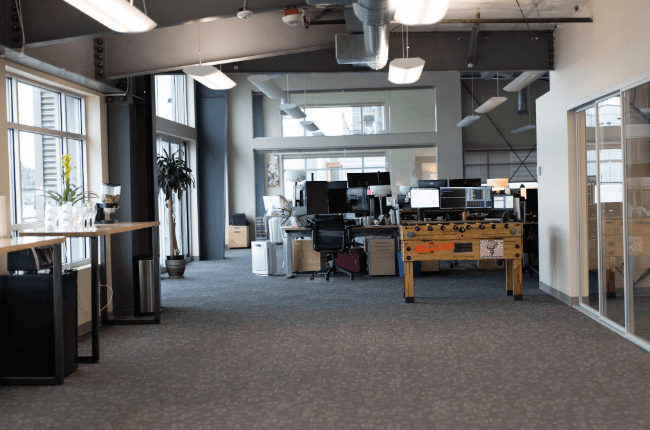 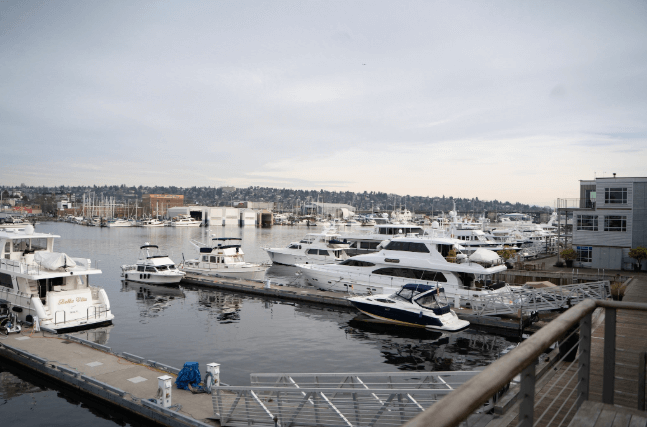 And I had my continuing role as pottery salesperson for my husband’s work at Tulip Festival, which earned me a “big mug” award (sorry, I couldn’t help myself) of a wood-fired, stoneware mug with WWP carved into the mountains on the outside. He also made one for each of the founders of WWP. 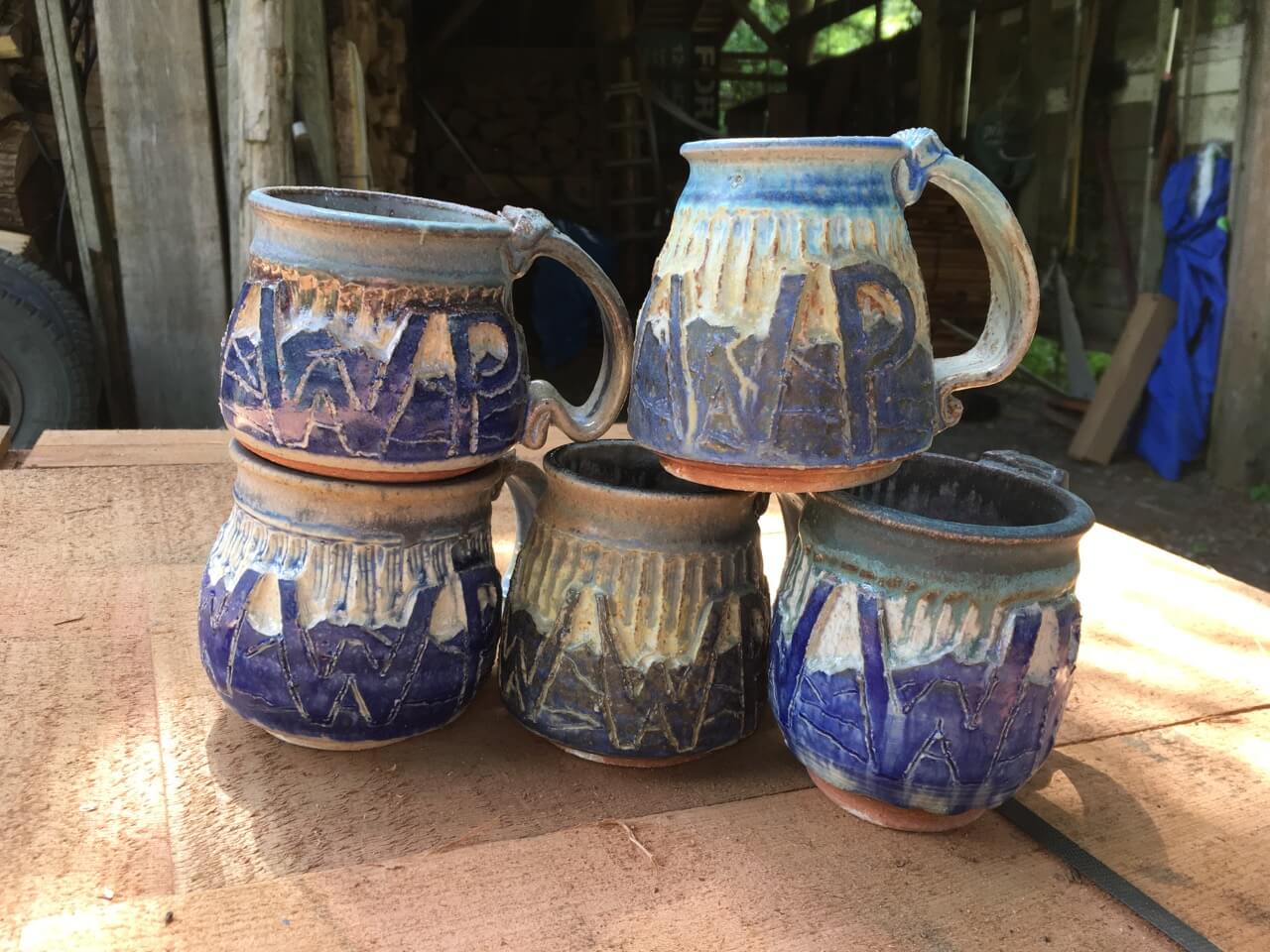 We did manage to squeeze in a few previews amid all this backstage and other roles work. As well as the one at Wheelhouse, we also staged a preview at Rallye Auto in Burlington, WA. Owners Doyle and Mary Guffie gave us a wonderful welcome and we performed on the showroom floor with an iconic 1960 Chevy Corvette behind us. Photographer and videographer Steve Christopherson joined us at this preview with his assistant, Red, which not only garnered us two more supporters for the production of this play but it means we’re getting closer to a video of our preview. We just need to work on the audio. To that end we’re trying secure a space with some microphones. Once we get that, we’ll be one step closer to letting you get a taste of the preview on our website. Plus we did a preview at the Skagit Valley Food Coop in their third floor conference room, snagging new (to us) actress, Susan, to read in that preview, as well as more actors signing up to perform in future previews.

Not that it’s all been smooth sailing. We went through one snafu––or at least I went through one snafu that I wrote about here––that set me back a little and we’ve had others that we’ve tucked under our belts and attributed to part of the learning curve. As Dustin said to me just last week, “I know the ladies from this play want us to be successful but I’m pretty sure they would accept us having to struggle to get to that success.” That sounded good to me. Very good, in fact.

So thank you for your patience. We’ll get back to you with more updates now that we’re stepping out from behind the scenes.